Treatment of the ‘red palm weevil’ or ‘Picudo‘

The red palm weevil, Rhynchophorus ferrugineus, is a pest, native to Southeast Asia that is spreading around the world as a result of growing trade in palm-affected countries, appearing red palm weevil outbreaks in different countries, among which is Spain .

The red palm weevil is one of the most harmful insects to the palm trees in the world, usually causing the death of the tree. It originated in the tropical regions of Southeast Asia and Polynesia, began its expansion 25 years ago attacking date palms of the countries of South Asia, Arabian Peninsula and Iran. It was introduced in North Africa through Egypt in 1993, continuing its expansion into European countries, Italy, France, Portugal and Spain, and always linked to palm tree imports.

HOW TO DETECT THE RED PALM WEEVIL

In case of Canary Island palms (Phoenix canariensis), the damage is located mainly in the head or crown of the palm, so observe if there is:
• Fallen external leaves, with obvious signs of tearing at the insertion with the trunk.
• Fall in general of the crown of leaves.
• A slightly decayed or unhealthy appearance of the most tender leaves of the central plume core, acquiring a color that turns from yellow to reddish brown.
• Holes in the cutting of the crown ‘tábalas’.
• Remains of pupae (cocoons or croquettes) between ‘tábalas’ and leaves.
• Arrows on the vertical angle. 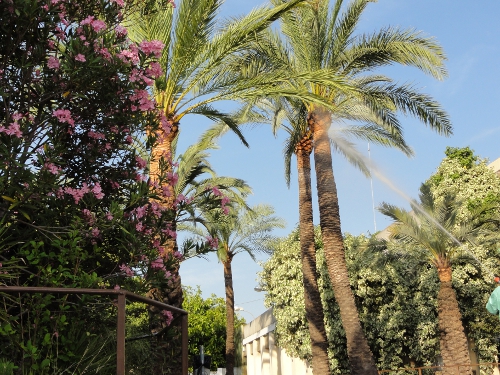